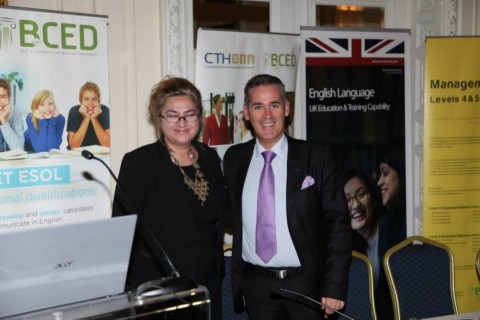 On Friday 28 February 2014 UK Trade & Investment (UKTI) Greece assisted BCED, a local educational consultant, in organising an event at the British Residence. This was aimed at supporting bilateral economic development by adding value through UK certifications. Education is one of the UK’s top exports generating over £17.5 billion towards the country’s economy. Higher education and vocational training are integral parts of economic and business development and are recognised as such by the UK government. With more than 100 awarding organisations in the UK and a number of these operating worldwide, British qualifications are recognised internationally and valued by employers throughout the world. UK educational institutions are encouraged to initiate and develop overseas partnerships and promote British educational excellence. BCED & CERTIFICATION The event aimed to reinforce and promote the integrity and quality of UK courses on sector-specific English in Greece and provide support to English Language Centres. This was by presenting a range of UK educational and professional courses provided by LCCI. This is BCED’s response to the local economy’s need to regain its competitive advantage, by placing emphasis on skills training in line with labour market demand. The Deputy Head of Mission, Andrew Staunton, opened the event by referring to the educational sector as one of UK’s key industries, as well as to the importance of certification of professional qualifications and English language in particular, which is “becoming the global passport to success” in a changing and challenging market. He also underlined the long-established relationship between the UK and Greece: “Greek students in the UK form the ninth largest foreign student population and English language is the first language to be taught and spoken.” The event included presentations by: •Anastasia Spyropoulou, Chief Editor ELT New •Mersina Malakellis, Pearson Head of Mediterranean Partner Markets, who noted that:“LCCI offer a portfolio of over 80 professional and vocational qualifications in over 90 countries around the world. The provision of LCCI courses throughout Greece is a great opportunity for investment in vocational and professional development to a wide range of people seeking employment and for economic development in local areas around the country in helping Greece recover from the economic crisis.” •Ian Gourley, Director for Quality Assurance & International Collaborations, BCED •Anna Delimani, President & Founder, BCED, also addressed the event:“We are especially proud of the success we have achieved with EDI in Greece in reaching more than 80% of the country. My aim for this event is to highlight the importance of lifelong learning and continuing professional development. […] Our focus is on revitalising local areas and facilitating adding value and competitive advantage to English language school owners in the range of internationally recognised courses and programmes they can offer." The event was well attended and UKTI Greece provided support in the form of valuable contacts and expertise connected to the promotion of UK education in Greece. UKTI Greece welcomes all business initiatives aimed at presenting distinguished British services to the Greek market and showcasing the very best of what Britain has to offer. BCED-Best in Continuing Education and Development represents CTH in Greece. BCED has over 30 years experience in providing top quality qualifications by leading international awarding bodies. Please read the full article at https://www.gov.uk