Posted on 26th October 2015
LAHORE, 20th October 2015: Each year, on the 20th of October, members of the World Association of Chefs Societies (WACS) celebrate the International Chefs’ Day. As members of the WACS, the Chefs Association of Pakistan (CAP) and College of Tourism and Hospitality Management (COTHM), Pakistan organised full-day events to celebrate the occasion in 10 major cities of Pakistan including Lahore, Karachi, Islamabad, Multan, Faisalabad, Okara, Sheikhupura, Sahiwal, Rahimyar Khan and Bahawalpur. This year’s theme was ‘Healthy Kids, Healthy Future’. More than 5000 chefs, cooks and other revered guests from the Hospitality, Travel & Tourism Industry participated in the events. 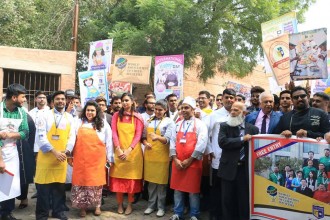 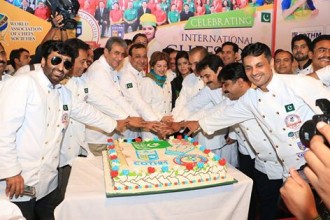 At the awards’ ceremony, awards were given to the best chefs in recognition of their excellence and contribution to the field. Shields, souvenirs and certificates were also given to the winners of cooking competitions, cooking classes’ participants and other contributors from the industry who took part in the chef’s day celebrations started by CAP and COTHM since 6th October 2015. It is pertinent to mention here that all these 2-week long celebratory activities followed this year’s International Chefs’ Day theme. Addressing the participants, CEO COTHM & CAP Secretary General Mr. Ahmad Shafiq said that Pakistan’s hospitality, travel, tourism and culinary industry represents extremely talented professionals of Pakistan. The CAP is making progress with each passing day as more Pakistani chefs and other professionals are joining its ranks from not only across the country but abroad as well. He said the association is working hard to get the Pakistani cuisine recognized as one of the authentic international cuisines. Speaking about the potential of chefs’ profession, he said this industry is one of highest paying and employment generating sectors of the world. Focus on its development and progress can change Pakistan’s fate. He said CAP and COTHM have been working hard for the past ten years to highlight the potential of Pakistani cuisine, hospitality and tourism. Mr. Shafiq also revealed that the CAP was also forming a National Culinary Team of Pakistan to represent the country at international culinary competitions and other events. CAP’s Vice President-Corporate Mr. Waqar Iliyas also spoke to the participants. He thanked the members and participants for their unceasing support and enthusiasm. He also shared the organisation’s vision 2016 which is focused on expanding its outreach across the world, efforts for the welfare of Pakistani chefs and Pakistani cuisine’s reintroduction and promotion as one of the best cuisines in the world.