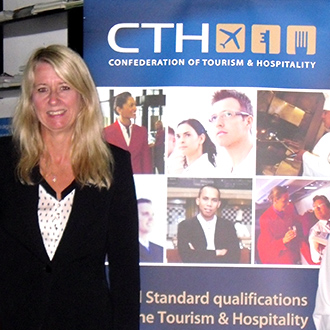 By Steve A. Morrell

The Sheraton, Shangri la and Hyatt are all upmarket brands operating world-wide in the tourist trade and the hotel industry. Already these brands have established trade marks in Sri Lanka. This is a positive step to enhance the country’s prestige in upmarket tourism, says Ms. Sue Graham, Head of Operations, Confederation of Tourism & Hospitality (CTH).

In an interview with The Sunday Island during a brief visit to Sri Lanka last week, she said the purpose of her visit to Colombo was to asses potential for expansion of tourism and ensure effective standards to attract those in the big–spender bracket to include Sri Lanka in their travel itinerary. Could this happen?, she was asked. "Nothing is impossible", she responded confidently. "I have not been out of Colombo. I leave tomorrow, but from what I have seen, I could safely conclude that Sri Lanka has to be on the permanent list for tourist influx. I have been told of the beauty of your hill country stations, for instance, Nuwara Eliya, are outstanding. I expect to return shortly. My next travel list will include areas that people speak so much about". She said with the expansion of tourism and attracting the big-spenders, facilities obtaining would have to be correctly tuned to entice expected tourist traffic. "Could a professional Sri Lankan fit into the management slot of the Sheraton, for example?’ She left that answer in the balance, but noted that it has now become necessary that such slots are filled by people who have had academic qualifications and would have at least a Bachelor’s Degree in Hotel Management. "We have a hotel school here, why would that not be enough?" "Hotel Schools do not train personnel to handle advanced management requirements that would be necessary in future. That is reason enough that those who enter the hotels, leave for further qualification or seek better paying jobs in other countries". "You spoke of the Thames College, do they offer Bachelors’ Degrees in Hotel Management?" "The Thames College, which is also an Institution I represent, is in collaborative partnership with CTH, and that means we, have graduate programs for the hotel industry. Graduates with our qualifications hold managerial positions in the Sheraton and similar 7-star locations. We have opened our doors to students from Sri Lanka. We have few who have continued to be with us". ‘What do you mean by few". "As we need a high standard English, we do not tolerate words like ‘anyways’; similarly we frown on plagiarism. Our standards are high. You come to us and jobs are readily available. And salaries to hold such positions are high. $ 100,000 is not a problem at that position. Our packages are completely different to that available in, for instance in Switzerland. Ours is a Management course, and not cooking. Our Degree carries quite some weight in most prestigious addresses world-wide. Sri Lanka, can, in the not too distant future, achieve considerable progress in the hotels industry. English, of course is crucial for such improvement. If one wants to compete internationally, there is no compromise but to be fluent in English. Publish on the Island Newspaper - Sri Lanka